The critical role of technology-based, disruptive innovations to a business

The IBM near-death experience of the early 1990's

Readings
Find the notes in the book title's post 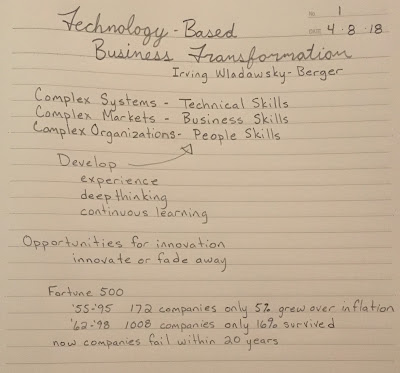 Was the IBM experience – rise, fall, re-birth – unique, or typical of other companies?

Rise and fall are typical, but their rebirth was unique.

Would IBM have undergone its huge changes, if it had not gone through a near-death experience?

Not likely. They were spurred to change because of the threat of failure.

How did this history and recent changes influence IBM’s particular Internet and e-business strategies?

IBM had to innovate or they would fade away. Their past business model would not be effective in the new marketplace. They poured resources into acquisitions and development strategies. In 1994 IBM pulled all its software assets together to build a stand-alone software business. Making this part of their business priority they were able to influence the future of business. Instead of being developers they acquired some middleware companies, along with their already extensive software brands they became the largest software company. IBM coined the term e-business, wanting to express a way to transcend access to digital information and online commerce.

What are key differences and similarities in different journeys companies take in embracing similar technologies – large and small, new and old, local or global, . . . ?

IBM was involved in every part of the stack, where other companies, including startups, were focused intently on their one contribution to the stack.
The stack
-Services
-Application Software
-Middleware Software
-Systems
IBM had to force limits to their ambitions and focus on areas that made economic sense.
Since technology now eliminates the obstacle of distance small companies could now compete and even do better than IBM.
Because other companies came to be because of the computing revolution they were able to start with, not change the way they did business in the new market.